A weekend in… Almeria, Spain

As the cowboy strides out of the saloon bar, the doors swing closed behind him, kicking up a cloud of sand and dust. He turns and stares back into the dark and musty inn. “Adios, niño,” he says. 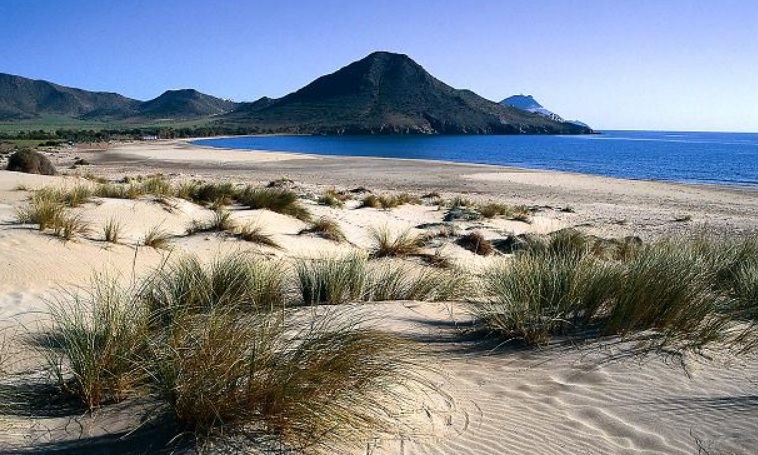 This ain’t no Texan. This is Almeria, the often-overlooked south-east corner of Spain, home to the only desert in Europe and host to many spaghetti westerns. Film directors including Sergio Leone and Steven Spielberg have seen the potential in the arid, mountainous landscape, European crews and European taxes, and made their films here, including The Good the Bad and the Ugly, For a Few Dollars More and Indiana Jones and the Last Crusade. The potential of the dry, other-worldly landscape inspires directors to this day: Ridley Scott has chosen it for his new film Exodus, about the life of Moses.

Wearing a cowboy hat and denim to get us in the mood, we are exploring Texas Hollywood, one of the working film sets that is open to the public. The small crumbling white church, the town square, the stables, courtroom and saloon bar look like a hick town on one corner, a Mexican pueblo on the next. The expansive mountain range beyond adds to the atmosphere. But the town is all fake — touch the walls of the county prison and you realise they are fabric, made to look like stone, “etched” with the nail-scratched tally of desperate prisoners.
After sitting through the cringy and slightly tacky cowboy show (fun for families but not for twenty-something sceptics) it’s time to explore. You can pick up a tourist guide to the paisajes de cine — walks (and drives) with added information about what was filmed where. Really it’s just a nice excuse to explore the terrain — unless you have a photographic memory of the westerns, the information about which gun fight happened on which hill is little more than an added extra. We drove through dusty tracks and parked up to walk along rocky, dry paths with the hills around us, passing the huge “Texas Hollywood” sign erected on the side of the mountain.

Many of the hotels in this region are in old cortijos or fincas (farmhouses), and have pictures on the walls of the day the film crew took over their hotel and made it into a Texan hideout or shootout scene. This region is so much more than a piece of film trivia, however. It is huge, and you can’t hope to see it all in a weekend. We decided to do one day in the desert, one on the beach and one inland, exploring the white villages of the Cabo de Gata natural park that hogs most of the coastline.

We covered serious miles through heart-stopping scenery. A 20-minute drive out of the desert is San José, a popular beach resort on the southern edge of Almeria. We had lunch of grilled fresh fish, charred vegetables and red wine at La Fábrica, a restaurant in an old factory which has a mini-museum about local agriculture. Sitting on the terrace you can see the contrasting landscapes of the region — the sea in the distance, cacti in the foreground and the hills behind. We headed down the long bumpy track to Los Genoveses, a private beach.
To the right of the cove, which is one of the quietest and most beautiful I’ve been to in Spain, is a large crop of rocks. Behind them is another equally gorgeous beach, Mónsul, where in Indiana Jones and the Last Crusade, a Nazi fighter pilot meets his fiery doom thanks to Sean Connery’s quick thinking (and umbrella). As I stirred from my siesta on the soft sand, the only action on an otherwise tranquil beach was a troop of tourists ambling by on horseback.

On the drive out of San José we stopped to watch a blistering sunset from the hill at La Isleta del Moro — a tiny fishing village whose large mound gives a panorama over the sea. We had a pre-dinner drink in the square. It felt more like a Greek island than the Spain I know. And there wasn’t an English voice to be heard.

I was surprised to find that the city of Almeria itself doesn’t hold much appeal. You don’t need more than half a day to explore the old city and walk up to the moorish Alcazaba fortress which has a lovely view and charming Arab-influenced atmosphere. The must-do bar is an old tapas place called Casa Puga, where you have to elbow your way in to demand a vermouth and some raciones in the back.

More rewarding to explore were the white villages of the Cabo de Gata. Driving high, up into the village of Mojácar we were treated to amazing coastal views and found a charming centre to explore on foot. We followed the walk up to the spectacular Mirador del Castillo, a viewpoint from the top of the village with an amazing vista over mountains, surrounding villages and the sea.

On our drive back along the coast we stopped at the tiny beach village of Agua Amarga, a charming chunk of coast with a row of restaurants along the sand. At Restaurante La Playa we devoured a plateful of the local speciality — berenjenas con miel (aubergines battered and fried, drizzled with local honey). Seeing people swimming, we knew the (sometimes resident) jellyfish hadn’t turned up, so we dived in and bobbed about with the Spanish families and young couples. Agua Amarga’s neighbour, the Playa de los Muertos, is thought of by locals as the most beautiful secret cove in Spain and it really is stunning. Fortunately, the whole Cabo de Gata area is protected, so it cannot be turned into another Costa del Sol.
We had a café con leche in the bar and took in the clear air. In just three days we had explored the desert, swum in small coves, taken shade in the crisp white mountain villages and eaten tapas in the centre of bustling Almeria city. Britain and the action of Indiana Jones felt a million miles away.

Ruth Lewy was a guest of Costa de Almeria tourist board (almeriatourism.com) and was provided with a car by Holiday Autos (holidayautos.co.uk)
Getting there

Hotel Cala Grande (00 34 950 38 82 28, calagrande.es) in the seaside village of Las Negras is cool, chic and welcoming with huge rooms, some with terraces. There are also three villas, which have hot tubs on their terraces. The hotel has a good spa, a pool and is just five minutes’ walk down the hill to the beach. B&B doubles cost from €105.

Hotel Catedral (00 34 950 278 178, hotelcatedral.net) in Almeria town itself is a charming, smart boutique hotel housed in an 1850s building right on the central cathedral square. You can’t beat the location and the rooms are stylish and cosy. B&B doubles are from €55.