Tents with altitude in Ladakh

Travellers now have a luxurious alternative to the often basic accommodation in this beautiful, but remote, area

“That monk, you see, was actually reincarnated as a Muslim — and it was predicted many years ago,” said my guide, Rinchen, smiling. He caught my baffled expression. “Well,” he continued, “in his previous life he was a very heavy drinker, so to solve this problem he returned a Muslim. That was most difficult for him and the family, very unusual, but they dealt with it . . . now he’s at the monastery, he’ll qualify soon.”

Rinchen had many curious stories but this one took some beating. It was my first day in Ladakh, a remote and beautiful region of the Indian Himalayas. Bordered by Tibet and Pakistan, Ladakh forms the eastern part of the state of Jammu and Kashmir. 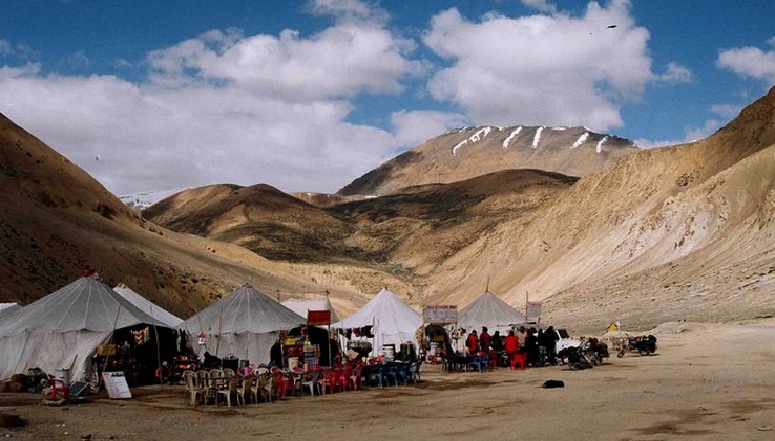 Almost everything about Ladakh is extraordinary. The intense light is startling, its dramatic roads bracing and its former prosperity rooted in an exotic caravan trade that linked the remotest outposts of Tibet, China and Central Asia. For a few months in summer, this is the ideal Indian destination, drawing trekkers to its gorgeous valleys and passes, and visitors keen to glimpse a mainly Tibetan Buddhist culture.

Until now, Ladakh’s relatively short tourist season hasn’t lent itself to particularly luxurious accommodation; charming but distinctly middle-range hotels and simple guesthouses rule the roost. I, though, was staying in a high-ceilinged luxury tent, complete with wooden chandelier, a four-poster bed and a veranda facing the spectacular Thikse Gompa, or monastery, the perfect place for breakfast of fresh pomegranate juice, oven-warm muffins and fresh fruit.

Welcome to the new Chamba Camp, just north of the Indus River on monastery-owned land. Along with their luxurious ambience and roomy dimensions, each of the 25 tents also comes with a butler. Mine, Newton, acquainted me with a dozen light switches and heater controls. “Dial 1 if you need anything . . .” he continued, handing me a phone. Furnishings are stylish but practical — low, foldable armchairs, cleverly designed bedside tables that resemble steamer trunks and bathrooms with copper basins set in rustic wooden counters.

Chamba Camp is a trial run for The Ultimate Travelling Camp, a new mobile luxury operation with plans to pitch in some of India’s most beautiful but generally ill-served and unsung corners. “The key,” explained the general manager Prem Devassy, “is exotic locations without luxury infrastructure”. The company’s mobility neatly capitalises on destinations whose appeal tends to be transitory by virtue of climate or festivals.

So, in India’s far North East, a camp is planned to coincide with Nagaland’s winter Hornbill Festival. Closer to the mainstream in Uttar Pradesh near Lucknow, Dudhwa National Park and Kotwara see the mobile tent company tapping into interest in India’s wildlife — birds and tigers in particular — and the fabled cuisine and culture of the 18th- and 19th-century Awadh kingdom. No stranger to tourism, Kashmir’s summer capital, Srinagar, will also see a camp by Dal Lake from this May.

In Chamba, the tents make a great base from which to explore. Once you are acclimatised to the rarefied air (conventional advice suggests resting for the first day), the Indus valley beckons. A clutch of medieval monasteries vie for attention but 15th-century Thikse is among the most imposing and, frankly, unmissable. I rose at dawn one morning and, accompanied by Rinchen, headed up its ridge to the main assembly hall to join the monks in their morning prayers.

This ritual began with two of them blowing conch shells from its roof, their gravelly drone sweeping down to the village below and seeping across the great valley beyond. We retreated to the hall. Boy monks distributed butter tea — something of an acquired taste — from silvery samovar-like vessels. Sitting on rugs up against walls painted with extraordinary swirling murals of deities and demons, we embraced the eerie world of Buddhist chants and meditations to a soundtrack of thumping drums and yelping horns. There’s no obligation to stay the full 80 minutes but on this morning we all stayed the course.

Over the following days, I took several excursions that showcased many of the valley’s highlights. I wandered the slender lanes and tunnel-like alleys of old Leh where fabled caravans once paused and pashmina wool, their most precious cargo, was relayed on to skilled Kashmiri weavers. We strolled up to the palace (a diminutive version of Lhasa’s great Potala Palace) — the former home of Ladakh’s royal family and now an occasional exhibition space. Higher still looms an ancient temple and tiny castle framed by streams of prayer flags. The footpaths will test your fitness but there are fine views across town and it’s deservedly popular at sunset.

Back near Thikse at a dinky little-known temple, Rinchen explained locals worshipped its deity primarily to secure a decent harvest. And those harvests, mainly of barley and potatoes, had recently been good. “But”, he noted as we climbed a small hill to one of the ubiquitous protector shrines overlooking the village, “around here it takes decades to make land suitable for cultivation.” Either side of the Indus stretched a band of poplar-lined fields that abruptly gave way to a desert of stones and scree that sloped gently from the foot of barren mountains.

“The aim is to grow all our vegetables in the chef’s garden,” said Prem later as we lounged on sofas over tea and cookies in reception’s marquee. “Onion, spinach, garlic, pumpkin and potatoes.” Come summer, Chamba Camp’s lawns and ponds should be landscaped. Eventually, they will bristle with fruit trees. Plans include a BBQ area and facilities for croquet and archery.

As this is monastic land, they won’t serve pork or beef, and they’re a touch discreet with alcohol. Yet the kitchen is free to serve remarkably tender lamb (from Australia), fish chowder, even lobster, and an array of well-executed dishes, Indian and Western, that barely a year ago would have seemed impossible in provincial Leh. In winter, Ladakh remains inaccessible by road so seasonal stockpiles are the norm. Much is trucked or flown in — from fruit to foodstuffs, fuel to furniture. Prem readily confirmed the obvious: the logistics of supplying and running a high-end camp are considerable.

After a short bike ride on country lanes to nearby Shey Palace — you go primarily for wonderful views from the crumbling fortress looming above it — Salil, the tour manager, checked I was up for the “big ride”. The world’s highest roads radiate from Leh like the spokes of a wheel and twocrest the ridgeline at the head of a beautiful valley near Thikse. Our mission, should I accept, was to drive up to the 5,300m high Wari La (“La” means pass) and promptly cycle about 18km back down to Sakti village.

Climbing to the pass I lost count of the hairpin bends as Rinchen indicated the dark distant specks of yaks grazing high in the mountains. Under clear, almost indigo skies, everything gleamed with a brilliant, surreal intensity. Eyeing the increasingly potholed road which soon decayed into a grit-encrusted track, I christened the pass “Worry La”. Ladakh abounds in quaint aphoristic road signs warning against rash driving, and buckling my helmet for gravity to do the rest I thought of my favourite: “Better Mr Late than Late Mr”.

“Low gear and keep braking,” Salil replied when I mentioned not being much of a mountain-biker. And while the venerable monasteries and their mystical mandalas hadn’t quite delivered inner peace, this glorious downhill ride engaged my inner child with whooping, almost delirious, pleasure. Salil led from the front, occasionally veering off-road to shortcut through the bends, and we paused at about the half-way point for a simple picnic washed down with tea from a Thermos.

Down at Sakti I opted to visit another small gompa. Free of the bikes, Rinchen re-joined me. We walked together up steps by a grove of willow trees to Takthok monastery which huddles up against a low cliff beside a cave. But the gate was locked and the small compound lay still and silent. “Many monks here,” said Rinchen earnestly, “are Tantric practitioners.” Meaning, to put it simply, they follow particularly esoteric practices as part of a high-gain but high-risk strategy on the path to Enlightenment.

“See that little house?” he continued, pointing out a dimple on the rugged hillside opposite. “A hermit monk lives there, been a recluse for years.” Locals desiring some special ritual or ceremony would trudge up there with offerings and sometimes he obliged. “Once at my sister’s home, he came to help us,” elaborated Rinchen. He now looked serious and told me a story that, even in the warm afternoon sunshine, set my hair on end. “They are very powerful people . . . but Buddhism also teaches them to exercise it carefully, discreetly.”

“How was your day, sir?” asked a beaming Newton when I returned at dusk. Now how, I wondered, does one explain the word “transcendental”?

Amar Grover was a guest of Cox & Kings (0845 154 8941,coxandkings.co.uk) which has a ten-day, eight-night tour including flights, two nights in Delhi with breakfast and five nights’ full board at the Chamba Camp, all transfers, the services of a private guide and most excursions, from £3,995pp. Chamba Camp will operate this year from June 15 to September 30. For more details and information on The Ultimate Travelling Camp’s destinations, see tutc.com

Jawai Leopard Camp In the midst of Rajasthan’s Aravalli hills between Jodhpur and Udaipur, this new camp comprises eight tent-suites. Rain showers, private viewing decks and handcrafted furnishings are complemented with in-house binoculars and semi-professional cameras for the use of guests. Although the area has become known for its leopards — and the camp boasts regular sightings — Jawai’s rural location amid villages of the Rabari people, traditionally great cattle and camel herders, lends much cultural interest.
Details From about £479 per tent per night, including all meals and beverages, house wine and beers, twice-daily game drives and laundry (sujanluxury.com)

Aman-i-Khás
Standing on the edge of Rajasthan’s Ranthambore National Park, Aman Resorts’ ten white Mughal-inspired tents form what is arguably India’s most luxurious camp (with prices to match). Dining and lounge tents complete with banquettes and a library, a spa tent, an open-air communal fire and a stepped swimming pool add to the rarefied atmosphere. In addition to its spa treatments — and the massages are great — you can also have Reiki sessions, yoga and meditation. Ranthambore’s main attractions are its tigers but other wildlife includes leopards, deer, sloth bears and hyenas.
Details $1,400 per tent, excluding meals and safari drive costs (amanresorts.com)

Chhatra Sagar
With an enviable location atop a small, late 19th-century dam in the midst of rural Rajasthan, this uniquely-sited camp offers a beguiling experience. Eleven tents face the serene lake while another pair stand on a low, even more private hill just beyond the dam. It’s an exceptionally tranquil spot that really excels in showing guests a slice of village India through their gentle “walking safaris”. The food is locally grown and is particularly good.
Details About £217 per tent per night including all meals, non-alcoholic beverages and a bird-watching tour or a farm and village walk (chhatrasagar.com)