Surf’s up in the Maldives — yes, really

Mad dogs and Englishmen may go out in the midday sun, but not many go surfing in the Indian Ocean at the same time. This is where I find myself, bobbing on a bright orange surfboard emblazoned with the slogan “Liquid Shredder”, waiting for the right wave in the middle of the Maldives.

Hang on a minute — surfing in the Maldives? Isn’t that all about flat-calm seas made for honeymooners to loll about in? Wrong: while there may be plenty of placid waters perfect for gently sloshing in the shallows, there are also some of the best waves in the world and the remote country attracts a hardened band of surfers from around the globe.

I’m not a hardened surfer, but I’m with a very good one: Steve Newton, the surf instructor at Six Senses Laamu (originally from Nottingham), sitting on the edge of a set of waves that breaks on a reef known as “The Corner”. The sun beats down on the translucent water — it’s in the high 30Cs. The water swells and crashes in a rumble and fizz. We have our eyes fixed on the horizon, watching the rolling waves heading our way. It’s really quite relaxing lazing on the board. 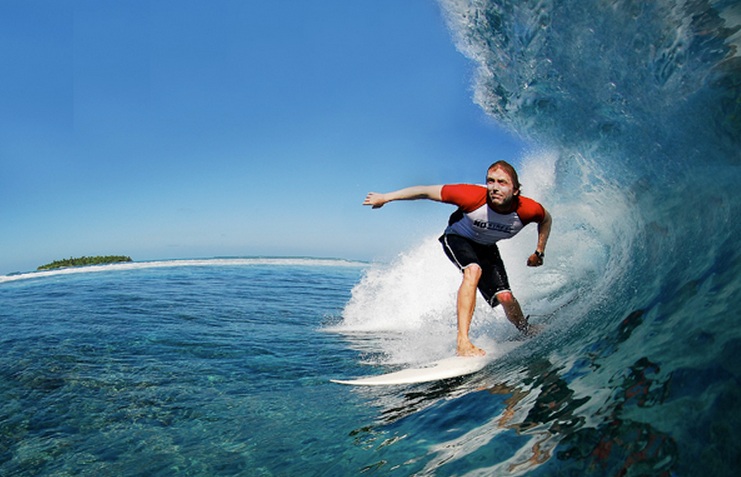 Then a big one looms — and Steve gives me the thumbs up. “Go like Usain Bolt!” he yells. “Usain Bolt! Remember Usain Bolt!” He’s referring to the position into which I need to flip upwards, with my arms spread and my legs apart, in the style of the Jamaican sprinter’s celebratory pose. Then he tells me to “Paddle slow!” followed rapidly by “Paddle hard!”

I do as I’m told and feel the force of the wave dragging me towards the reef. As it does, I leap up on to the board and stand for a few seconds trying to ape the Olympic hero— while wobbling like crazy. It feels like an eternity, well, long enough for me to say to myself: “I’m surfing . . . I’m actually surfing.” And then I crash into the spume and get pulled upside down towards the reef; righting myself in time to swim with the board back to Steve.

Surf enthusiasts who go to the Maldives, shunning its many plush resorts, usually join special “surf safari” boats, which are chartered to go to the best waves. These carry them to “famous” waves (famous among surfers, that is), which are consistently to be found in specific locations. Each of these hallowed spots is given a surfer name, so as well as “The Corner” there’s “Pasta Point” (in the North Malé Atoll, breaking within view of an island that was once home to an Italian-owned resort) and “Chickens” (also in the North Malé Atoll and named after a nearby former poultry farm island).

For the beginner though, going to “Pasta Point”, with its giant breakers, might be just a little bit reckless. This is where the Six Senses Laamu comes in. When it began its surfing lessons two years ago, it was not sure how guests — many of whom are honeymooners — would react. Steve, who describes himself as a “soul surfer” as opposed to a competitive surfer, has been pleasantly surprised. “The Maldives has a stigma: that it’s just for couples’ holidays and diving, but there are world-class waves,” he says, relaxing in the “surf shack” where he keeps his boards. “What’s great is that you can have the waves here all to yourself. I’m not into sharing waves: surfing with 200 other people, with all the aggression of catching a wave ahead of everyone else. Here it’s not like that. It’s much more civilised.”

The Six Senses — a laid-back resort with wooden villas on stilts and a chill-out cocktail lounge with throw cushions, hammocks and a DJ spinning tracks from a sound system built into a “grand piano” made of driftwood — is right by one of the best-known waves in the archipelago: the “Ying Yang”. We go out in a speedboat to investigate, and soon come to Hawaii Five-O sized waves with a 10ft swell crashing dramatically into a reef that’s home to the wreck of a tuna fishing boat. It’s a breathtaking scene. The safari boats regularly come here.

One of us (not me) is about to jump in and give it a go. Duncan, a fellow Brit who has been surfing for years, has brought a “body board”, a mini board that you don’t stand up on. Despite his experience, he dare not try a regular surfboard as he fears being dashed on the reef.

Then off he goes into the hill-like rollers; a wispy mist is whipping off the waves creating a kaleidoscope of colours as the late afternoon sunlight catches the watery haze. A few moments later we see him, soaring on top of one of the hills, hurtling along the crest, looking for a moment or two like a human dolphin. He disappears into an almighty crashing wave, and for a short while we’re worried about his safety — but then we see his arms flapping as he fights his way back through the ferocious water.

“Awesome . . . gnarly . . . epic,” Duncan comments on his return, after a few more exhilarating runs. “What a ripper!” he continues, adding a few further choice exaltations. So there you have it, away from the honeymooners’ sunloungers: the mad surfing dogs in the Maldives . . . hitting the waves in one of the world’s best surfing hotspots.

Tom Chesshyre was a guest of Turquoise Holidays (01494 678400,turquoiseholidays.co.uk) and Six Senses Laamu (sixsenses.com). Turquoise offers seven nights half-board from £2,469pp, including flights and transfers, for travel between May 1 and October 31. A two-hour beginner-intermediate surfing lesson costs £104.