The holiday where your alarm clock is a giraffe

Early morning wake-up calls don’t get much better than this: Lynn the giraffe pokes her head into our bedroom window eager for breakfast. She guzzles down the bowl of pellets we give her, her long grey tongue swirling round looking for more. Then, when we are enjoying our own meal, she and her friends and family poke their heads in a row through the picture windows of the breakfast room asking for more. 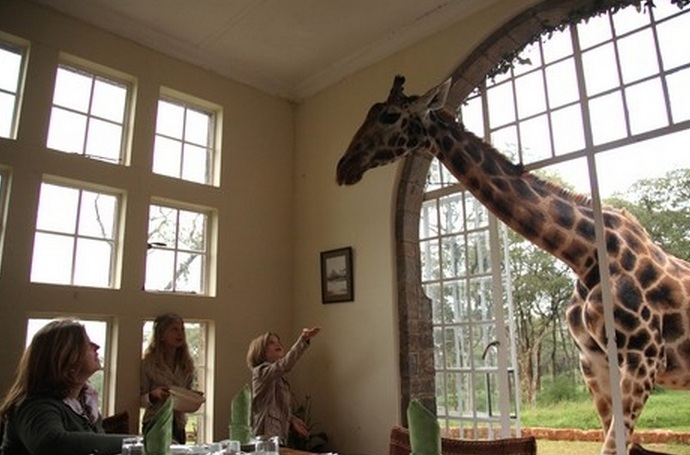 Welcome to Giraffe Manor, a unique stay in Nairobi that’s perfect as a stopover en route to Tanzania. Built in 1932 to resemble a Scottish hunting lodge, when the nearest neighbour was Karen Blixen’s farm, the manor is run like a colonial house party. Afternoon tea served on the terrace with its views of the Ngong hills segues into sundowners before a communal dinner and bed in four posters complete with mosquito netting and hot water bottles. Wood panelling, enormous fireplaces, and giraffe memorabilia are everywhere.

The manor has just ten bedrooms, and coincidentally, ten visiting giraffe who come and go, mixing their diet of acacia leaves from the trees with the pellets. Their tongues, grey to avoid sunburn, could almost wrap round your head, while their back legs could kill a lion with one swift kick. But they are gentle in their quest for food, “kissing” those who dare put a pellet in their mouths, and playing catch with those who don’t. At their feet, warthogs, fascinating in their ugliness, truffle in the earth for any dropped pellets.

Lynn and co belong to the rare Rothschild subspecies of giraffe, whose preservation owes much to “giraffe lady” Betty Leslie-Melville. She bought the manor in the 1970s with her husband Jock as a place to protect and breed the giraffe. Their first, Daisy, started putting her head through the windows looking for treats, a habit continued by other animals cared for by the Giraffe Centre they set up next to the manor. We visit the centre, where scores of people surround each giraffe, but we have been spoilt by the exclusive access from our window.

More rewarding is the nearby David Sheldrick Wildlife Trust, with its herd of young orphaned elephants, many of whose mothers were killed by poachers.

“I grew up living and breathing elephants,” says Angela Sheldrick, who carries on the job started by her mother of rearing abandoned babies and releasing them into the wild. “I don’t think it is possible to be exposed to elephants and not to be moved by them.”

My son and I certainly are as we stand by the waterhole and watch the young elephants drinking bottled milk before they play in the mud. There are 22 and the youngest, Ajabu, is only six weeks. She is followed by a keeper with a parasol who rubs sun cream into her skin, as if she were a princess.

We follow our visit with a safari in Nairobi National Park, its unique cityscape forming a backdrop to the animals. But we like the giraffe at the manor best of all. When it’s time to leave, Lynn blocks the front door and we have to wait while she is enticed away. She clearly wants us to stay as much as we do.

Rooms at Giraffe Manor cost from $505 per adult, full board with drinks, including airport transfers, entry to the Giraffe Centre, wi-fi and laundry. Children aged 3-15 pay $340 per night. If you want to feed the giraffe from your bedroom window, ask for a room at the front. There are also two family suites. Giraffe Manor can be booked as part of any trip through Nairobi with Expert Africa (020-8232 9777, expertafrica.com).

The Elephant Orphanage is open for an hour each day, from 11am. But if you adopt an elephant on sheldrickwildlifetrust.org in advance, for $50 for two, you can attend a more exclusive evening feeding time.