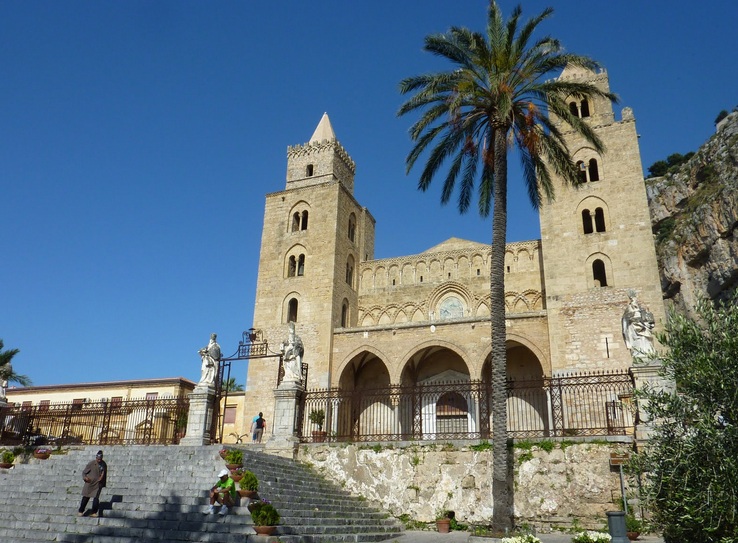 The author of Chocolat visited Venice and Rome on her way to Modica, home of the island’s oldest chocolate shop

Robert Louis Stevenson put it best: to travel hopefully is a better thing than to arrive. Certainly, for a writer more familiar with flights of fancy than budget airlines and package tours, the idea of travelling anywhere must have seemed hopeful indeed. But to this writer, as to so many of us, travel has become all about arriving at a series of destinations as rapidly as possible. The age of the ocean liner has passed. Air travel, once exotic, has become the most practical mode of transport, with passengers crammed into aircraft that seem more like buses than anything else. There is no real sense of distances crossed, no local colour, no sense of discovery along the way. Which is one of the reasons that this time, my husband Kevin and I have chosen to travel overland, to try to recapture that hopefulness, when simply to travel anywhere was a kind of adventure.

Our destination is Sicily. The time, early December. Given the choice, I’d rather travel out of season, avoiding the crowds. Our itinerary takes us first to Paris by Eurostar, and then to Venice by sleeper train, and then on to Rome and Syracuse. Time is the greatest luxury here, and overland travel does take time, but I’m hoping it will be time well spent, rather than in airports, fretting at security or sitting breathing recycled air. I don’t quite know what to expect, but it feels oddly romantic to be travelling in this way, watching the countryside go by, adjusting to a different pace. However, old-fashioned romance is not always compatible with current standards of comfort, and it does help to come prepared for all eventualities.

First-class travel on Eurostar is very pleasant indeed — clean, fast and serving very acceptable food. The night train from Paris to Venice, however, is rather more basic. The trains are elderly rolling stock, with primitive facilities. The bunks (both in first and second class) are comfortable and of a good size. In first class there is a tiny washbasin in the cabin and a small selection of toiletries. Towels and bed linen are provided — but given the overpriced and frankly inedible food in the buffet car, I would strongly suggest taking a few supplies. Our train gets into Venice at the civilised hour of 10 — we’re spending a couple of days here before moving on to Syracuse.

To me, Venice is most beautiful out of season, when it is free of crowds (and odours). Cold, bright and with the astonishing quality of light that so many artists have tried to recreate, with varying degrees of success, this city never closes for business, but simply reveals different, seasonal facets of its strange and claustrophobic appeal. Cobbled streets, archways, shrines, stone bridges over the canals, gorgeous churches, tiny dogs in padded coats, lanterns over the water at night. After two days of exploring its charms, we take a short but beautiful train journey to Rome, from which we move on to Syracuse.

The style of train is very like the one we took to Venice: basic, but functional. The interesting thing about this service, however, is that it takes us directly from Rome to Syracuse — the deck of the ferry is equipped with rails, on to which the carriages are shunted, one by one, as the passengers sleep. The process is not disruptive (although it did wake me up), and we arrive the next morning in Sicily, rested and ready for anything.

So far, I have to say, travelling hopefully has a great deal to recommend it — the fields of orange trees, the vineyards, the little corners of our route that we would not have seen from the air. But what of our destination? Will it have a different charm for having taken longer to arrive?

Sicily is a very large island. Even out of season, there is far more to see and do here than anyone can reasonably hope to cover even in a fortnight. We have hired a car for the week, but Sicily’s roads are not always good, especially off the beaten track, so Kevin and I opt to explore one region in depth, rather than spend too much of our time driving from place to place.

We’re staying in Modica, in the south of Sicily, 90 minutes’ drive from Syracuse. (There are frequent trains, too, for those who prefer to avoid the roads.) It’s an historic city, built on either side of a narrow valley. Modica Alta is the higher, less affluent part; Modica Basso, the lower and more prosperous part. A long tradition of rivalry exists between the two parts of the city. Each has its own cathedral, and every year the two patron saints of Modica — San Giorgio and San Pietro — are brought down ceremoniously from their respective plinths to face each other in combat for the leadership of Modica.

Such old religious traditions permeate this part of Sicily. Modica is a city of churches, with more than a hundred still in use — and another hundred now closed. At dawn and sunset, the church bells ring — their voices as cracked and persistent as those of the stall-holders in the market square.

Elsewhere, from the Corso Umberto I, with its varied shops, the main part of the town rises steeply through a series of winding stairways and little cobbled streets towards a cliffside peppered with tunnels and caves. Much of the architecture is Baroque, following the near-destruction of the town by earthquakes in the 17th century, but there are some stunning remnants, from the Gothic portal of the Chiesa del Carmine to the recently discovered 12th-century cave-church of San Niccolò Inferiore, built in a late Byzantine style, with decorations ranging from the 8th to the 16th century.

With its steep, cobbled streets, Modica is perhaps not the best place for anyone with mobility problems, but for those who brave the climb through the narrow streets to the top of the valley, the view is breathtaking. A few miles out into the countryside, there are other beauties to explore — orange and lemon trees laden with fruit and fields of flowers, even in December.

We are staying in a Monoresort cottage on one of those steep, narrow streets in Modica Basso. The name is misleading, as this is not a resort in any normal sense of the word, but a handful of little cottages scattered around the city. All different, all beautiful, the cottages are all fully equipped and stocked with a variety of food and drinks. There is an iPad forour use and a friendly personal assistant,Enrica, who can arrange anythingfrom transport to and from the beach to childcare, restaurant reservationsor even a session with a personal chef.

The town is only a few minutes’ drive from the coast but, although Sicily can still be warm enough for swimming out of season, we find the coastal villages deserted, shops and restaurants all shut. I rather enjoy the deserted beaches and empty seas, but all the same it is slightly eerie. The small seaside fishing villages vary in attractiveness and accessibility, but there are beautiful sandy beaches at Marina di Modica and Cava d’Aliga, among others. A few miles inland, it is different again. There’s the historic capital of the region, Ragusa, with its churches and palaces, and the elegant Baroque town of Scicli, with its cliffside caves.

We love the food in Sicily. It has its own character, independent from the mainland, reflecting its Arab, Greek and Spanish influences. We discover a number of excellent restaurants in Modica, serving local dishes such as spaghetti al ricci (spaghetti with sea urchins) or couscous al pesce (couscous with apricots, pine nuts and locally caught seafood).

To accompany our food, we try local red wines such as Nero d’Avola — pleasant though not too sophisticated — and dessert wines including the renowned Malvasia delle Lipari. You shouldn’t leave before tasting some of the local bakery’s specialities, including Inspector Montalbano’sfavourite fast food, the ubiquitousarancine, deep-fried rice croquettes, which may contain shredded chicken, beef, cheese or fried courgette.

There are some excellent chocolate shops here along the Corso Umberto I, including Antico Dolceria Bonajuto, the oldest in Sicily. Here, six generations of family chocolatiers have been making the bittersweet Modica chocolate, to an ancient Aztec recipe. You can visit the little factory and sample some of the more exotic local delicacies, including ’mpanatigghi, a small pastry filled with a mixture of sweet chocolate, almond paste and shredded beef, and unexpectedly delicious. Our visit coincides with the start of Modica’s annual chocolate festival, during which the city’s churches are lit with breathtaking, psychedelic designs, there is music and dancing in the street, and chocolatiers from around the country lay out their wares andcelebrate one of Italy’s favourite flavours.

People are very friendly here, especially if you make an effort to speak Italian. Elsewhere in Italy it’s easy to find English-speakers — here it isn’t as common, and for the first time in years I find myself forced to use my rudimentary Italian to get by. The extra effort is rather rewarding — a little like travelling by ferry-train. And the locals are more than happy to engage. I’m thinking of the old lady who, on seeing me standing in the rain looking into a (closed) pizzeria, not only insisted upon escorting me to her favourite bakery, but also held her umbrella over my head every step of the way.

The end of a holiday usually feels a little anticlimactic. This time, I’m hoping that our leisurely journey back will help soften the return to reality. An overnight ferry from Syracuse to Rome — with a full day in Rome as a bonus — then another night train to Paris, and finally the Eurostarback home.

What have we gained by avoiding the plane? Well, there were the sunsets, of course. The dawn over the vineyards. The fields. The sense of rushing hopefullytowards somewhere as-yet undiscovered, the long conversations, the laughter. Then there were the people we saw, the stories we heard, the atmosphere, the memories we collected on the way.

As I’ve always suspected, a journey can make all the difference to a destination. It can be a chore, or an adventure. And as we finally arrive, tired but at the same time refreshed, there’s a real sense of hopefulness — although as far as I’m concerned, there’s nothing as good as coming home.

This article was provided by http://www.strikeitfit.com