Rather than tackle all the iconic route from Chicago to California, John Bungey confined himself largely to Oklahoma

So what’s it to be? We are at the state fair in Tulsa, Oklahoma. We are due to start a trip down Route 66 — my grown-up daughter and I — but first we have a day to get our bearings, and try the local delicacies. And nowhere have I come across delicacies quite this bonkers: deep-fried cookie dough, cheese on a stick, frozen custard, the deep-fried peanut butter and banana sandwich famed for killing Elvis . . . And what’s this? Chocolate-covered bacon.

Vanessa, our charming guide to Tulsa (and actually everyone is charming round here) didn’t really want us to go to the state fair with its monster trucks and hucksters. And it is a little at odds with the plush, prosperous city she shows us — with its oil-money mansions and neat ranch-style houses just like in The Sims; its frisbee golf course (that’s golf, with frisbees) and vintage drive-in movie theatre. The small downtown has some fabulous Art Deco architecture and the Brady District is full of modish bars and eateries. On Guthrie Green we catch a free concert by Jamaican veterans the Skatalites, in the company of 500 revellers, two dogs and a pet goat on a lead (“Only in Oklahoma,” alocal assures me.) 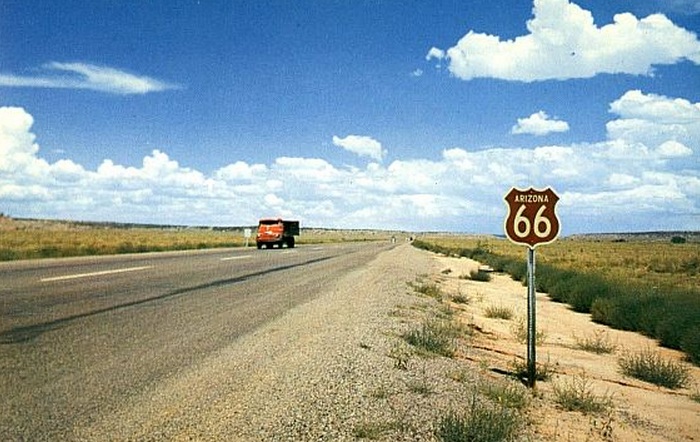 Route 66 “winds from Chicago to LA, more than 2,000 miles on the way,” as the song has it. And that’s what you’ll have seen travelled by diverse UK TV personalities with three or so weeks to spare — Billy Connolly, Jools Holland, Karl Pilkington . . . Or at least the bits of road that have not been torn up to be replaced by faster, straighter highways. However, my daughter Laura and I have only seven days, and rather than seeing the US through a car window, we’re here for an amble across Oklahoma. This is the mythic Midwest of America known to most Brits largely by song: Tulsa (24 hours from); Wichita (lineman); Oklahoma (!). It is also where some of the best-preserved sections of the “Mother Road” remain. This is Route 66 for softies, if you like.

Tulsa calls itself the birthplace of 66 and the city has a dramatic statue on the old route of local businessman Cyrus Avery, who proposed the road in the 1920s, in his zingy Model T Ford startling a horse and cart.

As roadside monuments go, though, it is dwarfed by “the world’s largest praying hands” in front of Oral Roberts University, founded by the televangelist (alumni: Michele Bachmann, Ned Flanders). These 60ft bronze hands, said to be modelled on Roberts’s own, have a whiff of Kim Il Sung.

More fun as a grand gesture is the Catoosa whale. This life-size model sits in a water hole by 66. It was built by Hugh Davis for his wife in the early 1970s as a surprise gift (a whale, a surprise?). Now renovated to a cheery sky-blue, it is our first chance for a comedy photo opportunity.

The next day we hit the highway in earnest for Oklahoma City in our hired Ford Fusion (car nuts take note, this is not the British Ford Fusion beloved by grannies and thoroughly mocked by Top Gear but the sleek American sedan with quite adequate freeway cred). Within a few minutes some thrillingly American things have happened: 1 We are overtaken by a 14-wheeler Pepsi truck. 2 We make a right on a red stop sign. 3 We tune the car radio to a country station and actually quite enjoy it. 4 We see a trailer park. 5 We see a man on the porch of his clapboard house in a rocking chair. 6 We stop and eat a giant burger with fried green tomatoes, plus a coke float, and regret it half an hour later.

The largely empty road winds past fields of beans and corn and pasture. In little towns, there are a couple of 66 museums and a preserved 1930s gas station. We pass mega-churches and flat open spaces; the vistas are not exactly beautiful, not exactly ugly. At the Rock Café the restroom walls are a tangle of international graffiti from tourist travellers. Somehow it doesn’t seem appropriate for the man from The Times to add his mark.

Lunch is at Pops — amid all the heritage buildings, this café (“food, fuel and fizz”) stands out. Essentially a giant glasshouse, it specialises in luminous bottles of garishly flavoured pop: cookies and cream; peanut butter and jelly and, yes, chocolate-covered bacon flavour. We opt for a glass of water this time.

The next 24 hours are spent in Oklahoma City. We breakfast at the Cattleman’s Steakhouse, which has been serving steak and eggs to cowboys for a century. We settle for a modest three-egg omelette with biscuits and gravy (fluffy bread, white sauce with sausage bits —we’re getting into the swing of this). The city is at the centre of cattle country and at the national stockyards they auction 10,000 head a week. We watch as the auctioneer ups bids in a low machinegun growl that appears to have no relation to English. The cattle prance nervously while men in big hats discreetly place bids. You can buy your own big hat in the shops near by but it won’t necessarily be cheap: the best, in pure beaver and custom-fitted, cost $800 (£490). A pair of elaborately tooled ostrich leather cowboy boots are $500; $329 for alligator.

At the National Cowboy & Western Heritage Museum they lovingly tell the story of how this small group of freelance herders became iconic within the American story — and, through Hollywood, heroic figures around the world. We learn that cowboys rarely fought Native Americans — that was the job of the US Cavalry — and that a good cook was key to a successful cattle drive. The museum’s 28,000 artefacts range from a re-creation of a 1900 prairie town to John Wayne’s eye patch from True Grit, which, it turns out, he could see through.

Local citizens aren’t sure whether they want the Oklahoma City National Memorial & Museum to be classed as a “tourist attraction” but that too will tell you something about local pride and the community’s response to adversity. It recounts the story of the bombing of the federal building by Timothy McVeigh in 1995 in vivid and heartrending fashion. On a lawn on the site of the doomed building 168 symbolic chairs are placed according to the floorplan of where the men, women and children were when they died.

It seems thoroughly inappropriate to be heading next to America’s premier banjo museum but our timetable is tight. For anyone vaguely interested in these sometimes fabulously ornate instruments (OK, not my daughter) it’s an eye-opener. My visit ends with the director, Johnny Baier, serenading me with his beloved 1940 Gibson instrument. And I’m one up on Paul McCartney: when he did Route 66 in 2009 he managed to knock on the door on the day the museum was closed.

That night we eat in Bricktown, the city’s new food and entertainment area. We vote the Italian food at Nonna’s — scallops, flat-iron pork steak — the best of the trip. The area buzzes with life and unlike so many sprawling US locales in thrall to the car, it is pedestrian-friendly. Several times we pitch up on faded smalltown high streets and find that buying a few groceries means a ride to the mall.

Then it’s back to the road, passing El Reno (“home of the fried onion burger” — tempting, but it’s only 10am) heading to the little town of Clinton. It has a superior Route 66 museum with exhibits arranged in decades — depicting Dust Bowl migrants, Fifties holidaymakers and Sixties hippies. In the car park we admire an open-top vintage Chevy Impala, rented by an elderly German couple who are driving the dream. Will, say, the M25 inspire this much love one day? All right, we know the answer.

And then we ourselves get a little road crazy. We have a loop planned to get back to Oklahoma City for our flight home, but instead stay on the road just to see what Texas looks like —which turns out to be like Oklahoma but browner. We finally turn around at little Shamrock with its quaint Art Deco filling station baking in the sun. It’s now the visitors’ centre. “Y’all from London?” we are asked. “You know Paul . . . Paul McCartney?” We confess we don’t.

Back at Elk City, we drive south then east, driving down straight, empty roads under the vast skies of the Great Plains. Eventually we arrive at Fort Sill to pay our respects at the grave of Geronimo, one of the last Native American warriors to resist the white man’s world. His remains sit under a stone cairn with an eagle atop surrounded by the graves of his many wives and children. In the dappled sunlight, it’s a beautiful rural spot, except that near by is an army firing range — a shame that the great chief’s afterlife must be disturbed by the bangs and blasts of his old foes.

We also visit the Comanche National Museum, a poignant evocation of a vanished way of life. These were a people whose lives revolved around the buffalo, a resource they exploited from nose to tail: meat and hides, of course, but the dung was used to make baby powder, the blubber for food pouches and the horns for teething rings. The newest display celebrates the role of the Comanche code-talkers in baffling German forces after D-Day.

That night in Lawton, tired of the car, we ask at our hotel for a restaurant we can reach via a healthy walk. The receptionist tries to be helpful but after half a mile or so we give up on the pavement-less highway and find ourselves scooting across a six-lane road and through a barbed-wire fence to get home.

From the city, we head out to the Wichita Mountains reserve. We’re behind schedule so have little time to seek out the local buffalo, just a chance to stop and wonder at a majestic landscape topped by Mount Scott — a glimpse of American wilderness before the railroads and freeways sliced through.

Lunch is at Meers, a proudly antique joint with burgers as big as your face, made from their own herd of Texan longhorn cattle, and iced-tea served in pint jam jars. I make the mistake of ordering root beer, forgetting that it’s basically Pepto-Bismol with fizz. That night we stay at Medicine Creek, a wonderfully quirky rural retreat of wooden chalets with a hippy/biker edge. We take a long cooling dip in the creek as inquisitive geese look on.

The next morning it’s home time: we’ve driven mega roads, eaten mega meals and enjoyed a fine old time in a place that’s too often dismissed as a “flyover” state. There is time, though, for one little crisis. As we set off for the airport I turn the car into a deep gutter. There is a dull clunk and when I get out to check, the front bumper area is no longer symmetrical. Dollar signs spin in my mind. Later at the hire car drop-off the young woman gives the the car a deft kick and the bent panel realigns — sort of. “Naah, y’all all right,” she says. Now that’s Midwestern hospitality.