If travel agencies rely on movies for effective marketing, they’re not doing a good job. From “Murder on the Orient Express” to 2008’s “Transsiberian,” with Emily Mortimer and Woody Harrelson, the Trans-Siberian train may as well be named after the film set on it, the 1972 cult-classic “Horror Express.” In truth, Trans-Siberian tours likely to provide unforgettable scenery and adventures, than expose tourists to mayhem. The railway travels across Russia, connects Moscow with the Far East, crosses one-third of the globe, and showcases unique eco-systems, as it journeys through the Gobi Desert, the Ural Mountains and the grassy steppe of Mongolia.

It’s In the Details

Ill-fated Tsar Nicholas II inaugurated construction on the Trans-Siberian Railway, in Vladivostok, in March 1890. The route begins in Moscow at Yaroslavsky Vokzal and runs through to Vladivostok through Southern Siberia. The China Easter Railway further connects with China. Some fascinating facts about Trans Siberian tours line:

– It connects Mongolia, China and North Korea with Russia

– You need Visas, for Russia, China, Mongolia and Belarus

– A one-way train ticket in a two-bed (considered first-class or luxury, as opposed to a four-bed, considered second class or compartment) sleeper is about 695 (GBP) – that’s for a six-night trip (inclusive tours cost much more, but offer longer journeys, tours, guides, and meals)

– Buy tickets with or without services; the former gets you a light breakfast and a cooked dinner with beer (simpler, and requires no cash on the train)

– Is the third-largest continuous service in the world

– During the peak migration years (1906 to 1914), about four million peasants arrived in Siberia

– Around 30% of Russian imports travel the line

– In 2012’s “An Idiot Abroad,” Karl Pilkington travelled the length of the railway

But exciting Trans-Siberian tours would not be complete without an examination of Russia’s remarkable churches. From Vladivostok to Moscow/St. Petersburg, visit:

Our Lady Grieving Orthodox Church, built in 1908 to honor the dead in the Russo-Japanese war, was the only church Stalin allowed to remain in the city during his reign.

The Church on Blood in Honour of All Saints Resplendent in the Russian Land is built on the site of the Ipatiev House, where Nicholas II, his family, staff and pets were executed in 1918. 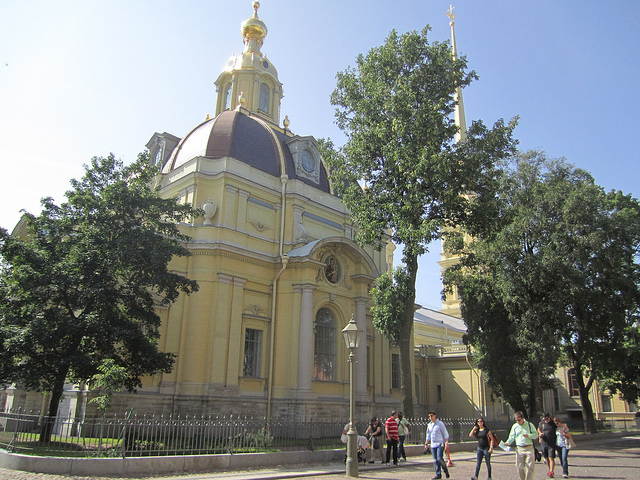 The Saints Peter and Paul Cathedral, in the capital of Tatarstan, on the banks of the Volga River, built in 1722, is a must-see, and exemplary of the opulent excellence of Russian churches.

– Visit Basil’s Cathedral (Cathedral of Vasily the Blessed), built from 1555 to 1561 on the orders of Ivan the Terrible, is the city’s hub, and has been since the 14th century. Shaped like the flame of a bonfire rising into the sky, it is wholly unique in Russian architecture.

– Built in the 16th century, the Novodevichy Convent is considered only second to the Kremlin architecturally, with its Baroque detailing, it was a haven for the rich and privileged cloistered. For a time it became a women’s penal colony, then a museum, and in 1994 resumed function as a nunnery.

– Isaac’s Cathedral is the largest Russian Orthodox in the city, and the fourth largest cathedral in the world. It took 40 years to build, and is covered with 220 pounds of gold; inside, columns are laced with lapis lazuli and malachite.

– The Church of the Saviour on the Blood, built as a tribute to Tsar Alexander II, features iconic blue and green patterned domes, interior walls and cupolas covered in mosaic biblical scenes, and a memorial of four jasper columns, located at the site where Tsar Alexander II was assassinated by a bomb in 1881.

This article is provided by http://www.agentsofdrive.com