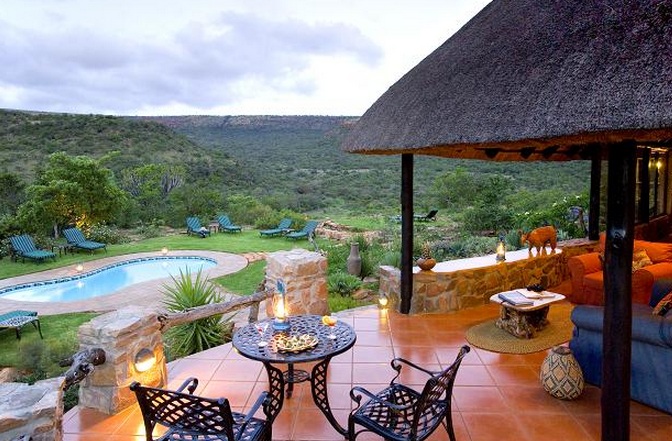 They tumbled over the hill in their hundreds, a hurtling mass of hooves making miniature thunder as the wildebeest ran to the river. And then — did we see it? Was that a flash of gold against wildebeest brown? Already amazed by the flowing mass of animals before us, we couldn’t believe our luck that here too was a lioness, running with them, then moving in to fell one as it slowed to cross the river.

It was, they told us, the third lion kill in the valley in a fortnight. The stunning landscape before us — the River Ntiakitiak flowing through safari-coloured hillsides on its long route to the Nile — had become the valley of death. We watched, breathless, as the lioness dragged her prey near a bush, a ready meal for her and her cubs.

You’d be lucky to see this remarkable sight on a game drive. But we hadn’t even had the bother of bouncing around in a Jeep; we were watching the drama play out from the wooden decking of Mahali Mzuri, Sir Richard Branson’s new camp on the northern border of Kenya’s Maasai Mara.

The camp looks as extraordinary in its own way as the sight we had just witnessed. A dozen tents strung out along a ridge some 1,700m high are propped up by curved steel girders rising and twisting to form a rim around a canopy roof. It certainly makes a statement in the savannah, whether you think it looks a little like a row of misshapen Japanese hats or perhaps manta rays swimming over the top of a sea of green bushes.

This is Branson’s seventh Virgin Limited Edition property in a varied list including his flagship Necker Island, a ski chalet, and a Moroccan kasbah. There is already one safari camp, Ulusaba, in South Africa but Africa has always been for Branson a “place that’s very dear to my heart”. He has been planning Mahali Mzuri for six years, since Jake Grieves-Cook, former chairman of the Kenya Tourism Federation, told him that the great wildebeest migration was in danger of getting strangled by the spread of farmland in Kenya.

“His idea was that people should get together to make reserves along the course of the migration, employing the Maasai to work in the reserve and pay them more for the land than they would earn by putting cattle onto it,” Branson told me.

The result is the 13,500-hectare Olare Motorogi conservancy, which leases land from 277 local Maasai. Formerly it was divided into individual freeholds. With two neighbouring conservancies the land creates a buffer zone to the north of the Maasai Mara game reserve that is half its size. Yet unlike the Mara, it is for small numbers of luxury tourists only, with just 94 guests in five camps, of which Grieves-Cook runs one, and Branson’s was the last.

Branson started Virgin flights in 2007 (which, ironically, stopped last year because of a drop-off in tourism) and forged ahead with the camp through Kenya’s economic and political woes. Opening its doors on August 1, Mahali Mzuri means “good place” in Maasai, although frankly that is an understatement — this is a new breed of safari camp in East Africa in terms of luxury.

The tents, with flapping canvas walls beneath the solid roof (don’t be put off if I tell you it’s made from structural PVC) are kitted out like a rustic chic luxury hotel room, with wooden floors and leather sofas. Wi-fi is as free as the flow of champagne — all alcohol, even the bottle of Veuve Cliquot in your minibar, is complimentary. The clawfoot bath in the fully plumbed bathroom is, like the enormous bed, positioned to look out onto the valley vista (although I couldn’t get the full benefit of this as it was chilly and windy during my visit, so the tent flaps remained closed). It’s a view shared by the open restaurant and bar, the infinity pool and the opensided spa tent, where I enjoyed a soothing massage with zebra voyeurs.

From this rather staggering base we set off on game drives with our Maasai guide Lenkoko Ketuyio, aka Vincent, past acacia trees nibbled by giraffe topiarists into flat-topped umbrella shapes and across endless plains stocked with what must be a lion’s perfect buffet of topi, zebra, wildebeest and Thomson’s gazelle. By the end of a single drive, we had ticked off four of the Big Five if you count a leopard hiding behind a tuft of grass (we saw his spots). Only the rhino eluded us; they are rare in the Mara.

This is the same game that inhabits the adjacent, unfenced, Maasai Mara, but instead of seeing it in a convoy of safari vehicles, we had it almost to ourselves; only guests staying on the conservancy can go on game drives here. And unlike those staying on the reserve, we could later ditch the vehicles for a walking safari.

Flanked by Maasai guards in traditional regalia and a ranger with a gun, we walked close to more than a dozen giraffe, many huddled together under their acacia umbrella in a perfect demonstration of why the collective noun is a tower of giraffes. Later, when they started their slow- motion run, it became obvious why that term changes to a journey of giraffes.

There was a deserted Maasai house to explore, a mud, dung and stick structure, in some places tied together with mosquito netting. Traditions die hard in this part of the country, where the measure of a man’s wealth is still in cattle, boys become men during a circumcision ritual when anyone who flinches is shunned for life, and where earlobes are pierced and stretched.

As we snapped pictures of the earlobe-stretched Maasai guard Muli, Vincent chimed in with: “Are you guys on Facebook? You could post the pictures there.” We were still marvelling at the anachronism of it all on our return to camp, when a black mamba shot out in front of us, then squiggled away.

There was more to see of the Maasai lifestyle — and the effect of the conservancy on it — on visits to the local community. An extended family of 17, mostly women and children in colourful clothing but one man holding his mobile phone to his ear, lined up to shake our hands outside their modern boma (lifestock enclosure). Its stakes and wire had been paid for from renting their land to the conservancy. Near by, we visited a newly built school with its rows of wooden benches and chairs. It’s just one of the projects in the conservancy, from beekeeping to education against female genital mutilation, with a trust arm to handle any donations that is financed by a $5 per tourist per night levy on the camps.

After this outing, as with the others, we returned to a feast at Mahali Mzuru; the chef Liam Breedveld who has worked at Necker Island and Nobu, considered it his duty to amaze us with four-course dinners that wouldn’t be out of place in a posh London restaurant. Think slow-roasted fillet of beef on a bed of creamed spinach, desserts such as strawberry and basil soup and champagne sabayon, and at breakfast no fewer than three types of fresh croissant as well as the usual offerings.

One night, we returned hungry from our game drive to find a surprise bush banquet awaiting us, tables set up under the lamp light, and a special show of the Maasai adumu, a leaping, jumping dance around the camp fire.

We weren’t the only ones to feast that night. Our earlier game drive had taken us down to the river near to the spot where the lioness had made her wildebeest kill. There, we watched entranced for two hours as she and her cubs played peekaboo with us in the long grass. She was enjoying her meal; her golden muzzle was stained with fresh blood and the wildebeest hooves rose and fell as she chomped. But those mouthfuls were being monitored by others, too, who wanted a taste of the action. From the hillsides, first one hyena, then slowly a growing force of six came, circling and sniffing while the lions ate, all the time waiting, waiting for their chance.

It came after nightfall when we could no longer see. But all that night, the victory yowls of the hyena sounded out over the valley of death.

Jane Knight was a guest of Mahali Mzuri, Virgin Holidiays and Hip Hotels. Three nights staying at Mahali Mzuri costs from £2,599pp including flights with Kenya Airways to Nairobi, internal flights and all-inclusive accommodation including alcohol and laundry, plus two game drives a day. Book with Vhiphotels (0844 5732460, vhiphotels.co.uk). There is a children’s programme for children over 8 and two family tents sleeping four.

After the flight to Nairobi international airport, transfers include one hour to reach Wilson airport, a 40-minute flight to Mara North and a one-hour land transfer to the camp.

The wildebeest migration is from July to October in Kenya. There is a mini wet season in November and December and a larger one from March to May; generally it’s better to visit in the dry season.

I have always travelled to Africa since I was a teenager and love it — the people, the wilderness, the game. I was also very honoured to be made a Maasai elder, although I haven’t made use of the extra three wives offered yet (I doubt my wife would let me).

We built our first camp, Ulusaba, in South Africa and it has spectacular views, although it is more bush like than in Kenya. In Kenya, a friend of mine called Jake Grieves-Cook (former chairman of the Kenya Tourism Federation) spoke to me about the wildebeest migration. He mentioned that it was in danger and that it could get choked as farming was getting in the way.

Sam [his son] set off to try to find the perfect spot. The advantage with Mahali Mzuri is that it is on high ground with spectacular views down the valley. I thought the name sounded beautiful and it happened to have a positive meaning. And unlike the main game reserve which is overpopulated with tourists, it feels like going out from your own private home.