It’s rare to leave England on a summer’s day to arrive somewhere wetter, colder and infinitely greyer. So when we stepped off the plane in Iceland into the 7-degree greyness of an August day, made even colder by the wind chill and omnipresent rain, I wasn’t too happy.

Cold I had expected, but not this cold, not this miserable. There is clearly a reason it’s called Iceland — and why its residents pay religious attention to the six daily weather forecasts. 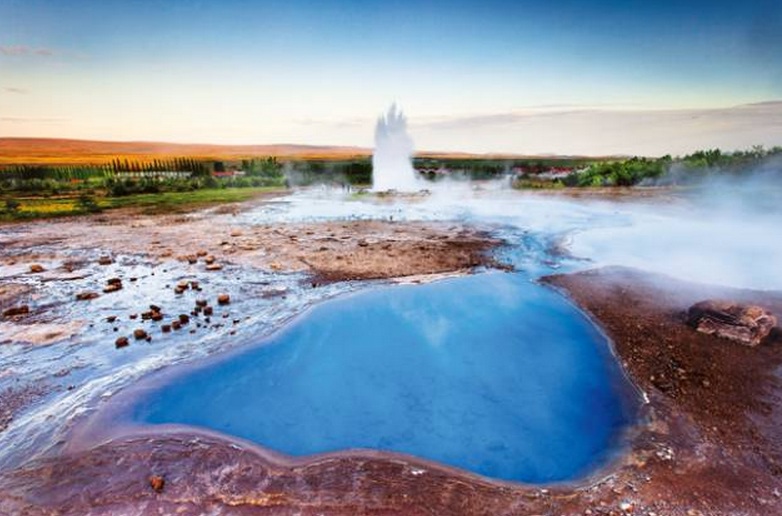 The outlook didn’t get much better on the drive from the airport through desolate countryside with no trees and mile upon mile of moss-covered lava. It ended in the bleakness of the most northerly capital in Europe, Reykjavik.

If you’ve seen photos of the quaint corrugated iron houses here, be aware that there are actually only a handful of them, surrounded by hundreds of blocks of utilitarian flats. And, as we soon found, if you can afford to eat anything in the restaurants other than the enticing national dish of hot-dogs, you’ll find food that is mostly salted, smoked, or in the case of shark flesh, putrified.

“You’ve got to be kidding,” my son exclaimed when he heard that puffin, whales and sheep’s testicles were some of the more exotic items on the menu. No wonder, I thought, that this cold, unwelcoming land whose people can be taciturn to the point of bluntness, has one of the highest suicide rates in Europe.

So with the food and the cold and the greyness, perhaps Iceland wasn’t the ideal place for us — one sun-loving mum and one 7-year-old — to head to on a family tour. But then how many places can you go just a two-and-a-half hour flight from England and, staying in the city, take day excursions to see amazing geysers and glaciers, go whale-watching or wallow in the Blue Lagoon?

Let’s not forget the volcanoes either. This bizarre country, with one foot in each of the North American and Eurasian continental plates, has plenty of them, including Eyjafjallajökull, whose plumes of volcanic ash back in 2010 brought Europe’s air traffic to a halt.

So we set off on a tour of the south coast to explore the ash-covered plains, taking in the volcano museum with its moving film of how a family rebuilt their lives — and farm — after the eruption.

Driving rain, though, meant we couldn’t enter the reputedly stunning Thórsmörk valley to see Eyjafjallajökull with the glacier that lies on top of it. Instead, we took in another glacier snaking through the mountains, melting at the edges in a rare burst of sunshine.

I would have given a lot to have seen this glacier, pushing along the detritus from the valley floor, when studying A level geography. Certainly, the whole country seems to be geography 101, but on this eight-hour SuperJeep safari, which felt like a marathon even to me, my son was too young — and bored — to be impressed.

The bad weather stayed with us on our excursion the next day, during which we got a brief glimpse through a curtain of rain of Gullfoss, surely Europe’s most impressive waterfall, as it plunged down 32 metres (105ft) into a deep canyon. Then we sprinted, soaked, back to the café to warm up with one soup and one very ordinary sandwich, which made a £20 dent in my wet wallet. I dread to think what prices were like before the 2008 economic crisis.

It was the same at Geysir, where we watched entranced as, every four minutes, a steamy jet of water exploded through the earth’s surface to a height of 40 metres. We only managed to stay for two watery shows before, teeth chattering, we ran for the warm.

So it was good to really heat up in the Blue Lagoon, wallowing in the deliciously warm milky blue water that has collected as a result of drilling through the earth’s crust to fuel a geothermic plant. Through the steam, we could see the plant while the rain pelted down and the wind raged.

Clearly Icleand is a lot hotter underground than on the surface, something we’d noted on our drives, with regular sitings of spouts of steam and hot-water pipes zigzagging across the lava fields to supply cheap power to Icelanders impoverished from shelling out so much for rubbish food.

So the Blue Lagoon was a hit. Or at least it was until I saw my hair in the mirror — it looked like the coiffure of someone who had put their fingers in an electric socket. I wish I could say the same for our other activities.

Although my son liked horse riding, as we headed off through the drizzle, hunched over our sturdy little mounts, I was busy calculating that for our 30 minutes on horseback, the excursion with transfers and waiting time actually took three hours. And neither of us was particularly fond of whale-watching, which was so cold, we could see our breath on deck as we stood, wearing clothing sodden from earlier trips that day, for two and a half hours before we spotted a minke whale arcing out of the water. It’s hard to explain to a bored, soaking 7-year-old that this is a privileged sight.

To best enjoy this country en famille, I’d say you’d probably only want to go with teenagers. And because Reykjavik’s hotels are functional rather than flush with facilities, and there is little to see in the capital, I’d recommend a short, sharp hit, taking in Gullfoss and Geysir on the Golden Circle Tour as well as the Blue Lagoon; our four-night trip was easily two nights too long.

However, you might be luckier than we were with the weather. And for a weekend with a difference, you won’t find this kind of amazing variety elsewhere. Give it a go — just don’t forget to pack your thermals.

Need to know
Jane Knight was a guest of Iceland specialists, Discover the World (01737 214 291, discover-the-world.co.uk). A four-night tailormade family adventure including flights with Icelandair, and four nights’ B&B at Hotel Arnarhvoll costs from £1,062 per adult and £778 per child under the age of 11. The price includes activities and exursions including Thórsmörk and Eyjafjallajökull volcano by SuperJeep (full day); family adventure riding tour (30 minutes riding); whale-watching (3 hours), Golden Circle by coach (6 hours) and entrance to the Blue Lagoon. Some activities have a minimum age restriction.