Iceland: Come on in, the water’s boiling

Iceland with its volcanoes, geysers and glaciers is full of wonders and its towns are charming, too. It’s like Balamory with beautiful shoes, says Caitlin Moran

There was a business trip to America that I was taking two of my sisters on, which Hurricane Sandy forced me to cancel at the last minute.

Before lunch on Sunday, we were 48 hours away from Chicago, then New York. After lunch, the phone rang, and we weren’t.

“We’re still going to go somewhere,” I said, firmly. “You’ve booked the time off work, and I’ve bought a travel plug. There’s no way we’re not activating some kind of “Tour Mode”. Where have you always wanted to go? Is there anything you’ve always wanted to see?” 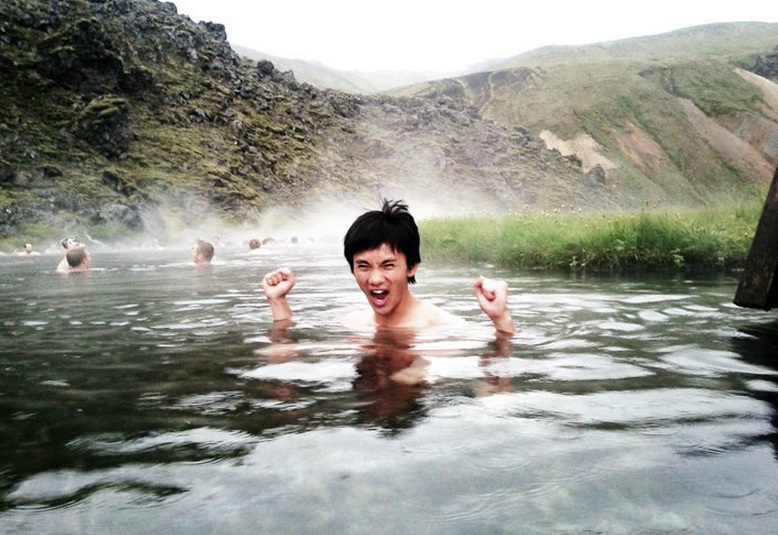 These are great sentences to be able to say to your siblings. Heal the stasis of summers spent in a tiny caravan parked on some gravel in Mid Wales, arguing over who would have the last sausage. God we were bored. We never moved. The rest of the world was so far away.

“Anywhere on earth!” I reiterated. “We could smoke fags by the Seine at dusk. Drink bicerin in Barcelona. Fall in a canal in Amsterdam.

“Go and see the … things . . . of Prague. I realise those are all in Europe, which shows my view of ‘anywhere on earth’ is limited, but we’ve only got four days — so jog on if you want to go to Vietnam.”

“Google says that the northern lights are currently approaching the peak of a 13-year-long cycle,” Chel said, looking up from her iPhone. Cheryl is very brisk. She manages a shop. She has a mind for business, a body for sin, and an iPhone with a 4G connection. You don’t mess with Chel. “The sky’s on fire. The krona is still weak against the pound. We should go.”

So, 48 hours later and we’re on a plane to Reykjavik. It turns out you can absolutely check the weather forecast for the aurora borealis and jump on a plane to chase it if it looks good. This is something you can be very spontaneous about. We have three seats on a plane, and a hotel 20 minutes from the airport. It’s only a two-and-a-half hour flight. We’re going to be under the aurora borealis in the time it takes for the 29 bus to mess about from Great Russell Street to Green Lanes. Amazing.

We check into the Northern Light Inn — a basic, borderline youth-hostely place, of which almost half consists of a massive, floor-to-ceiling window. This shows a pretty total view of the Blue Lagoon, a geothermal power-plant that feeds into a massive luxury spa complex. We are in an awesome, elemental landscape of black rock and boiling white clouds, spilling out of volcanic vents. It feels we are at nature’s beginning. The act of creation is happening right outside our inn.

“You won’t see the lights tonight,” the woman on reception says. “Definitely not.” We look out of the giant window again, at nature’s astonishing, elemental etc. Black rock. Clouds. Vents. “Where is the nearest place where we might find homosexuals, and dancing?” Chel asks, briskly.

Twenty minutes later and we are on a coach to Reykjavik. They run every hour, on the hour, from the Blue Lagoon to the capital city. It’s an hour-long drive through blasted, elemental etc. We keep our faces pressed up against the windows — lest the cloud breaks momentarily and we see the northern lights. It starts raining, hard. We have a very long conversation about sado-masochistic sex, instead.

Reykjavik’s just like I remember it, from the old Britpop days, when a succession of hot young Icelandic bands with massive promotional budgets would fly music journalists to interview them, get them absolutely hammered for 48 hours straight, and then pour them onto an 11am plane back to London, hair still stiff and white from the silica mud of the Blue Lagoon, never having rested in a bed. I once had such a great conversation with a woman that we swapped bras on the dancefloor, without missing a beat. It’s basically Balamory run by people in beautiful shoes who get very, very drunk.

We have dinner and dandy cocktails at the Fish Market — Icelandic ingredients done in a Peruvian/Japanese style — all ceviche, sashimi and spice. There’s some minke whale on the menu. It tastes like venison. Chel has googled minke whale, and they are not endangered. That’s why we’re eating it. Chel has an app for everything.
The meal is both lovely, and 21,000 Icelandic krona, which I’ve decided I’m just not going to google the worth of, in case it upsets me.

“I can tell you,” Chel offers, wielding an app. “No, Chel,” I tell her, holding up a hand, as we wander the twinkly, adorable streets. “It’s far less fun when you know. FAR less fun.”

At midnight, the taxi back to the hotel costs 7,000 krona. God knows how much that was. Maybe I could have bought a house with it. We spend the whole journey with our faces pressed to the windows, looking for northern lights. The rain turns to sleet. The sky is empty.

Thursday, 7am. Two hours before sunrise.

Still, we’re not going to waste our time in Iceland sitting around, waiting for the sky to explode! For the land here explodes, too. If you think you can handle sitting in a Jeep for 12 hours, the two-in-one Golden Circle and South Shore tours will take you on a circular trip of southern Iceland’s most notable geological features, for 31,900 krona per person — which might be either a bargain, or an astonishing extravagance. I’ve chosen not to know. I’m just going to sit in a seat, looking at stuff.

We get picked up from the hotel at 7.20am by our tour guide, Clint. That’s not his real name, but he insists we can’t pronounce his real name correctly, even though I think we’re pretty accurate, and could pass for natives. Especially as Chel has googled the one “must have” Icelandic phrase, “Talarðu ensku?” — “Do you speak English?” With my amazing facility for language, I immediately repeat this back to her as “Parlez-vous Français?” which is useless in four entirely different ways. Clint’s chatty. I think the longest he goes without chatting is three minutes — possibly four.

“I have ADHD!” he keeps saying. “I only sleep three hours a night. My mother said I was a nightmare as a child. I could operate a video player at the age of four!”
This chattiness is good when he’s explaining the geological history of the things we’re seeing. It’s bad when he starts telling us about a man he put in hospital when he beat him up.

I think we all felt a little bit like Cybill Shepherd in Taxi Driver at that point.