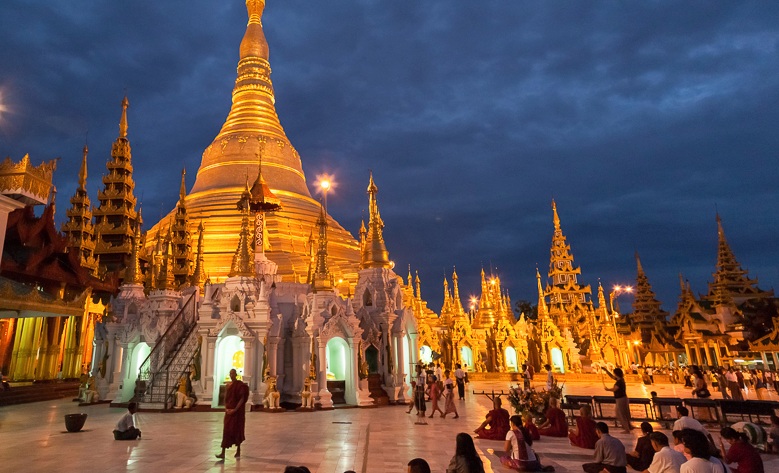 Myanmar is the rising star of the ocean and river cruising world. Last year saw Orient Express Cruises debut its second river cruise boat, Orcaella, on the river. This year 2014 witnesses the introduction of Myanmar sailings by AmaWaterways (0808 2235009, amawaterways.co.uk), with three different itineraries that include the atmospheric triumvirate of Yangon, Bagan and Mandalay with their markets, monasteries and temples.
Details: A 14-night “Hidden Wonders of Myanmar” cruise from Yangon to Mandalay, plus a one-night hotel stay in Yangon post-cruise, costs from £5,929pp, including flights. It departs on November 23.

The 70th anniversary of the D-Day Landings on June 6 will be commemorated on this voyage with Swan Hellenic (0844 417 2413,swanhellenic.com), which also pays homage to those who died in the First World War. At Dunkirk, passengers can explore Flanders and the town of Ypres, before visiting Dunkirk’s beaches where thousands of stranded British troops were evacuated in 1940. Swan’s ship Minerva will hold its own Service of Remembrance on June 6 while cruising off Normandy and will sail to Caen from where passengers can visit the Gold and Sword beaches where British troops landed.
Details: A 12-night round-trip sailing from Portsmouth on June 4 costs from £2,335pp, including tips and shore excursions.

Get a different view of the White Continent with Aurora Expeditions (020-7228 1230, auroraexpeditions.co.uk), which has introduced snorkelling excursions in the icy waters around the Antarctic Peninsula on its sailings this winter. Snorkellers will be issued with specially designed drysuits and given training to cope with freezing conditions. The reward is the chance to explore the waters alongside penguins, seals and whales.

If you thought cruise ship activities couldn’t get any more bizarre, wait until you see the latest vessel from Royal Caribbean International (0844 4932061, royalcaribbean.co.uk). The 4,152-passenger Quantum of the Seas, which launches in November, will boast the first dodgem cars at sea, a skydiving simulator and a viewing capsule that rises 300ft above the waves. The entertainment promises to be just as captivating with the ocean-going debut of West End musical Mamma Mia! Its sister ship,Anthem of the Seas, which launches in spring 2015 will be based at Southampton.

Details: A nine-night package, departing on November 22, and sailing from New York to Florida and the Bahamas, costs from £1,185pp, including flights and one night in New York.

Leading tenor Alfie Boe will take centre stage in the first of several short sailings from Southampton to the Continent with P&O Cruises (0843 3730111, pocruises.co.uk) in May, October, November and December. The acclaimed singer, who shot to fame in Baz Luhrmann’s production of La Bohème on Broadway and subsequently starred in Les Miserables, performs on the May 26 departure.

Details: The May 26 cruise is for four nights to Belgium and Guernsey and costs from £329pp. It is followed by a three-night cruise on October 11, and two four-night voyages on November 6 and December 13.

Luxury line Silversea (0844 2510837, silversea.com) is becoming more adventurous with the arrival of its third expedition shipSilver Discoverer, which will sail to Asia, Australasia and the Pacific. One of the most fascinating places it will visit is the remote Russian Far East, which for many years was closed to Westerners. Untouched landscapes, indigenous tribes, a rich array of birds and wildlife that includes brown bears, Arctic foxes and reindeer are the high points of this remote region.

Details: An 18-night sailing from Nome in Alaska across the International Dateline to Otaru in Japan, departing on August 14, costs from £8,950pp. Flights are an extra £1,980pp.

Unravel the secrets of St Helena aboard one of the last working Royal Mail Ships, RMS St Helena (020-7575 6480, rms-st-helena.com) that serves this isolated South Atlantic isle. Professor Colin Lewis will give on-board lectures on a special “Hideaway Tour” sailing and visit key points on the island. It will also be one of the last chances to visit St Helena in this way before its long-awaited airport opens in 2016.

Details: An 18-night package that include the five-night voyage from Cape Town to St Helena, an eight-night stay on bed and breakfast at the Wellington House Hotel on St Helena, and the return voyage to Cape Town, costs from £2,745pp. It departs on September 11. Flights are extra, though tours are included.

Go wild next Christmas on a new series of sailings to Africa and Asia with Voyages to Antiquity (0845 437 9737,voyagestoantiquity.com) that starts with a three-day Kenyan safari pre-cruise. Passengers are taken on game drives in the Amboseli and Tsavo national parks before departing for the Indian Ocean islands of Comoros, the Seychelles and the Maldives on the Aegean Odyssey. The voyage ends in Sri Lanka, with a two-night hotel stay post-cruise.

Details: A 21-night Christmas and new year package that includes the 15-night sailing from Mombasa to Colombo departs on December 19 and costs from £4,595pp. Flights, excursions, gratuities and selected drinks are included.

Encircle a continent on an unforgettable voyage to Africa with Holland America Line (0843 3742300, hollandamerica.com), which departs from and returns to Southampton. The ship’s route takes it through the Suez Canal to the Middle East before sailing through the Indian Ocean and reaching South Africa. It then follows Africa’s western coast with stops at Angola, Ghana and Senegal before arriving at the Canary Islands and the Iberian Peninsula on its return journey northwards.

Fresh pixie dust has been liberally sprinkled over Disney Cruise Line ship Disney Magic with a host of new attractions and spruced up facilities. Having been “re-imagined” last year, the ship now boasts even more magical experiences with a water “thrill slide” and new restaurants. Disney Magic is spending the summer in the Mediterranean with departures from Venice and Barcelona that, for the first time, include more sailings around the Greek islands.

Details: A 12-night Venice to Barcelona cruise includes calls at Athens, Rhodes, Mykonos and Santorini. It costs from £2,017pp, including flights, with Virgin Holidays Cruises (0844 4175003,virginholidayscruises.co.uk) and departs on July 14.

Fitting celebrations are planned by Cunard (0843 3742224,cunard.co.uk) to mark the 10th birthday of the line’s flagship Queen Mary 2 next May. In addition to two transatlantic “Birthday Crossings” from Southampton to New York on May 9 and New York to Southampton on May 16, Cunard has also introduced two special transatlantic sailings, in June and September, that additionally call at Halifax, the Canadian city where founder Samuel Cunard was born.

Details: A seven-night crossing on May 9 from Southampton to New York costs from £1,229pp, including return flight.

12. A Poms voyage Down Under

Follow in the footsteps of the first “£10 Poms” who left Tilbury for a new life Down Under nearly 70 years ago on a sailing departing the Essex port for Australia this November. Cruise & Maritime Voyages (0845 4300274, cruiseandmaritime.com) is offering the cruise on its ship Astor, which joined the fleet last September. The vessel’s route will take it to the remote British South Atlantic territories of Ascension Island and St Helena, South Africa and the Indian Ocean islands of Réunion and Mauritius.

Details: A 38-night sailing from Tilbury to Fremantle, near Perth, on November 5, costs from £2,889pp. The return flight is not included.

Following hot on the heels of Princess Cruises (0845 075 0031,princess.com) ship Royal Princess, memorably named by the Duchess of Cambridge in Southampton last summer, is the line’s next new ship, Regal Princess. She sails into service in May and will boast largely the same facilities as her sister, namely the novel glass-bottomed SeaWalk, extending over the side of the ship, and the line’s largest top deck pool, the venue for water and light shows.Regal Princess will spend her inaugural summer cruising the Mediterranean.

Details: A 12-night cruise from Barcelona to Venice on July 1, including calls at Livorno, Naples and Istanbul, costs from £1,591pp cruise-only. Flights are from £149pp.

Next year’s 100th anniversary of the opening of the Panama Canal could be the perfect excuse to sail along this wonder of engineering that links the Atlantic and Pacific oceans. Noble Caledonia (020-7752 0000, noble-caledonia.co.uk) is one of the companies offering sailings along the 50-mile passage in 2014, before the canal opens to larger ships in 2015 after being widened. This sailing features a daylight transit of the canal taking eight to 10 hours.

Details: A 15-night voyage from Barbados to Costa Rica includes calls at Grenada, Curaçao and Colombia before transiting the Panama Canal and calling at points in Costa Rica. It departs on December 20 and costs from £4,795pp, including flights.

A new name is set to make waves in the European river cruise scene in 2014. Emerald Waterways (0808 1159442,emeraldwaterways.co.uk) is being launched by Australian travel company Scenic Tours, which also operates a fleet of luxury ships on Europe’s rivers. Emerald Waterways will have two vessels,Emerald Sky and Emerald Star and hopes to attract younger customers with facilities that include an innovative indoor swimming pool that converts into a cinema at night, one-bedroom suites and alfresco dining.

Details: A one-week Danube sailing from Nuremberg to Budapest on July 19 costs from £1,795pp and includes flights, complimentary drinks with meals, shore excursions and gratuities.
16. Going overland in Asia

Luxury line Crystal Cruises (020-7399 7601, crystalcruises.co.uk) has added its largest range of overland adventures in Asia, offered on sailings between February and April. In total, it is offering 15 one and two-night side trips to attractions in Myanmar, Vietnam, Thailand, China and Cambodia.

Details: A 10-night cruise from Hong Kong to Beijing visits Shanghai and Dalian before reaching Beijing where a three-day extension includes many of the city’s notable sights. It departs on April 9 and costs from £4,431pp for the cruise and land-stay. Flights are included, along with drinks and gratuities.

17. Golf and wellness on the river

River cruises don’t have to be all about meandering along the river. Avalon Waterways (0800 6681843, avaloncruises.co.uk) has expanded its special interest sailings for 2014 with new themes that include golf, beer-tasting and wellness. These are in addition to its established themes encompassing jazz, classical music, wine appreciation and Jewish heritage.

Sail in style along the coast of Vietnam and through the striking limestone formations of Ha Long Bay with upmarket line SeaDream Yacht Club (0800 7831373, seadream.com) on its debut season of cruises to Asia. Another highlight is a voyage to the exotic island of Papua New Guinea, while other itineraries feature Bali, Bangkok and Phuket.

Details: A 13-night sailing from Bangkok to Hong Kong, including calls at Sihanoukville in Cambodia, Nha Trang in Vietnam, and Macau, departs on March 2 and costs from £5,340pp. The price includes gratuities and drinks, but flights are extra.

19. Meteor showers in the Canaries

Fred Olsen Cruise Lines (0800 0355150, fredolsencruises.com) promises stars aplenty on a summer sailing to the Canary Islands that coincides with Perseid meteor showers. This striking natural light show, best seen during early evenings and nightfall, is due to occur during the first two weeks of August as debris from the comet Swift-Tuttle prompts an explosion of shooting stars, with up to 60 an hour.

The exotic waters of the South Pacific beckon on this sailing with Regent Seven Seas Cruises (02380 682280, rssc.com) as the upscale line returns to this region in the autumn after a three-year gap. It is offering a programme of sailings to and from Papeete, the capital of French Polynesia, that starts in November.

Details: An 11-night round-trip voyage from Papeete, which visits other points in French Polynesia including Bora Bora and Nuku Hiva, costs from £5,249pp, including flights, shore excursions, a night’s hotel accommodation pre-cruise, drinks and gratuities. It departs on December 7.