A weekend in… Baku, Azerbaijan

Three tall flames lick skywards from the centre of Baku as we approach from the airport toward the capital of the “Land of Fire”. The flickering tongues of red and orange slowly reveal themselves to be the illuminations on the three Flame Towers, Baku’s 21st-century icon. The dramatic glass Towers — the first of which has opened as the Fairmont Hotel — are a fitting symbol for Baku with its fiery origins and recent leap from Soviet backwater to oil-rich Dubai wannabe.

It isn’t Dubai — not yet at least, although it may feel a bit like it from inside the Fairmont, with its chandelier of 600,000 crystal beads, 18m-high foyer and glass walls. (Although, if you are planning a trip to Dubai, a lot of savvy research can reveal some fab money-saving deals – but don’t forget to plan for your Dubai visa!) 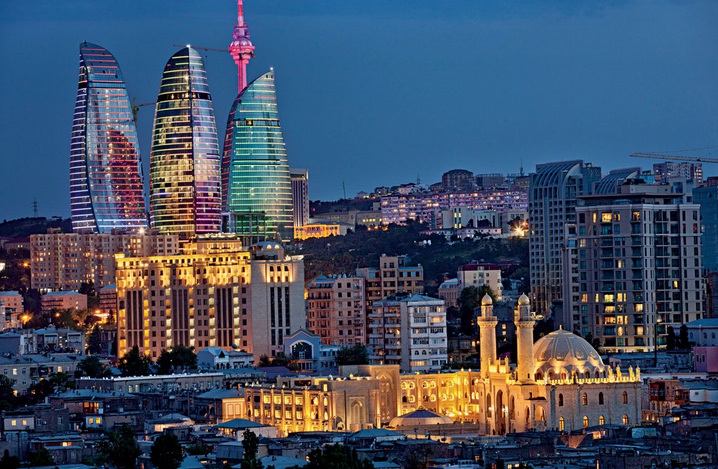 In the morning, I travel a short distance into town and a long way back in time to Baku’s first iconic tower. Maiden Tower is a Unesco World Heritage site, a 12th-century cylindrical watchtower with an oddly shaped buttress that looks out over the Caspian Sea. Baku’s waterfront has been cleaned up, planted with trees and turned into the 9km Bulvar (boulevard) where everyone gathers to see and be seen in summer.

Maiden Tower stands on the waterfront side of Baku’s historic Ichari Shahar (Inner City), still part-surrounded by its 12th-century crenulated citadel walls. Its narrow streets encompass a medieval minaret and the last palace of the Shirvanshahs, rulers of this area from the mid-9th century until they were deposed by the Persians in 1501.

Inside the palace complex, high imposing doorways carved with complex Islamic patterns and inscriptions lead to a series of now-spartan stone buildings: the royal family’s private mosque, remains of an early 15th century hamam (Turkish bath, with underfloor heating), the main residence and the mausoleum with a line of carved stone sarcophagi in which lie the king who built the palace and his five sons.

At the time of the Shirvanshahs, Baku was a stopping point on the ancient Silk Road from China to Western Europe and several of the original caravanserai (inns for the camel trains) have been restored and reopened as restaurants. Two storeys of rooms surround a central courtyard. Camels resided below, people above. We settle at one of the tables, set on bright traditional-patterned rugs amid fig trees and richly painted chests, in the now-covered courtyard of Mugham Club, for a meze-like Azeri lunch.

Replete, we wander the streets beyond the Inner City to discover Belle Epoque Baku. Here the oil barons of the first black gold rush more than a century ago (when Azerbiajan briefly produced half the world’s oil) including the Rothschilds and Rockerfellers, built their mansions. Many now house designer shops such as Céline and Tom Ford, serving the oil-rich of today. The oil-barons’ mansions were all confiscated when the Soviets arrived in 1920, but many have been recently restored, their honey-cream façades shining in the daytime sun and night-time floodlights.

I get a look inside one of the original mansions at the National History Museum. Its 101 rooms were once home to the Azeri oil baron and industrialist Zeynalabdin Taghiyev, “father of the nation”, who also provided Baku with its first girls’ school, theatre and piped fresh water. His colourful Art Nouveau hallway leads upstairs to two grand reception rooms, both opulent but in different styles: Eastern for his oriental guests, western for Europeans. Baku has always looked both ways.

The museum is full of photos, artefacts and stories of Azerbaijan’s past, from post-Soviet independence right back to 12,000BC when cave dwellers first carved petroglyphs into the soft limestone. There are a few in the museum and more can be seen an hour’s drive south at Gobustan National Park, a Unesco World Heritage site. Strolling through the vast boulders that scatter the foot of the flat-topped hill here, I am glad to have a guide to point out the pictures though they are obvious once spotted: simple figures of horses, bulls, hunters, busty women, and men doing a dance similar to a traditional spring dance still popular today. There is also evidence of a much later writing, claimed to be the easternmost Roman inscription.

The next day we head just north of the city to visit the Ateshgah Fire Temple. Azerbaijan is known as the “Land of Fire” because it was home to the fire-worshipping Zoroastrians until the Arabs (and Islam) arrived in the 8th century. It is thought a temple was first built on this site in the 2nd century; it was certainly rebuilt in the 17th century by Indian fire-worshippers who lived like hermits in the stone rooms that surround the central courtyard. Here, beneath a stone canopy, a fire altar burns. Today the fire is fuelled by piped gas, but in earlier times the flames rose spontaneously from the rock.

They still do at our next stop, Yana Dag (literally Burning Mountain). Here, at the base of a bare, rocky bank, flames lick primevally from the ground, 24/7, come rain or shine. The reason? Natural gas escaping under pressure from within the rocks. Oil is not far from the surface either; in days gone by people greased their cart wheels by rubbing them with soil.

Baku still worships at the altar of this natural fuel, but now the oil and gas are sold to finance the vast modern buildings spreading across the skyline. We drop into the curvaceous bright-white splendour of the Zaha Hadid-designed cultural centre. We spot the almost-complete Trump Tower, the brand new Baku Eye (the local equivalent of the London Eye, 60m high and expected to turn soon) and the novel Carpet Museum in the shape of a rolled rug (opening), before returning to the most symbolic structure of all, the Flame Towers.

There is a new icon on the way too. The foundations are currently being laid at the out-of-town Khazar Islands development, which is intended to out-Dubai Dubai and include the tallest building in the world.

Fairmont Baku 5* (00 994-12-5654848, fairmont.com/baku) is the latest of the six five-stars to open in Baku in fewer years. Conveniently located, it has a spa, several bars and restaurants and, opening shortly, a jazz club and restaurant-nightclub at the very tip of Flame Towers— 30 storeys above the ground. Doubles cost from about £200 (room only).

Shah Palace Hotel (00 994-12-4970405, shahpalacehotel.com) is just inside the main gate of the Old City. Rooms are arranged around a four-storey atrium, with a rooftop restaurant that is open round the clock. Doubles cost from £116 but discounts bring the price down to about £100 a night.

How to get there

Tendir (Kicik Qala, 2a, 00994-55-2148400), in a single wooden room tucked up against the 1Inner City walls, makes its own bread in a traditional stone bread oven. It serves great inexpensive Azeri food. Mugham Club (A. Rzayev 9, 0094-12-4924085) is a smart and atmospheric converted Silk Road caravanserai with excellent local food and often traditional music.

The only guidebook specifically to Baku is the Time Out Guide. It is good but rather out of date.